Christmas seems like a strange time of year to talk about refugees—or is it? Trinity Evangelical Lutheran Church, Steelton, discovered that it wasn’t so odd when they accepted Bishop Dunlop’s synodwide invitation to observe Refugee Sunday on the second Sunday after Christmas.

“That’s the Sunday that Trinity usually celebrates as a service of Lessons and Carols,” Pastor Victoria Larson said, “and this year was no exception.

“However, woven throughout the biblical texts and traditional carols were stories that reminded the congregation of its own history as a place of refuge for immigrants, and calls to consider the plight of the millions of modern-day refugees.”

Founded in 1888 to serve the German-speaking immigrants who came flocking to the area in search of a better life, Trinity’s congregation saw their own story reflected in the plight of refugees worldwide, and particularly those out of Syria. They also found it in the Bible, in the midst of Isaiah’s longing prophecies about homecoming, and in the Holy Family’s flight to Egypt. 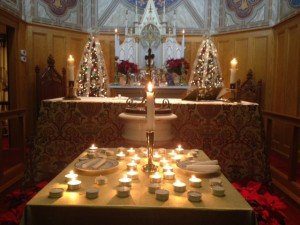 As part of their response to God’s Word and the Spirit’s call, Trinity has been collecting money to donate to the Lutheran Church in Hungary, which is dealing with a huge influx of refugees and a hostile government. A number of Trinity’s own members trace their roots back to Hungary.

We give thanks for the faithful witness of Trinity, Steelton. Is your congregation doing something to address the refugee situation? Please let us know so that we can share the story.