The Truth Will Set You Free by Rev. Tim Seitz-Brown 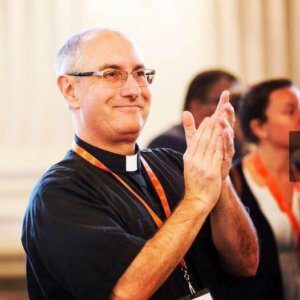 On December 27, 1763, fourteen “image of God bearers” were being held in “protective custody” at a prison on the site of what is now the Fulton Opera House in Lancaster. They were the last fourteen remaining members of the Conestoga (or Susquehannock) tribe—old men, women, and a few children.

Unfortunately, the sheriff and the guards left them alone, because they were terrified of thugs from a village east of Harrisburg known as the Paxtang Boys. Instead of receiving the promised protection, a genocide was completed. In 1600, there were 7,000 Susquehannock Indians. The last fourteen surviving members were murdered in 1763 on our 2020 local mission field known as the Lower Susquehanna Synod.

The Paxtang Boys were led by the “Fighting Parson,” a Presbyterian minister by the name of John Elder. And the gang was enacting a Christian teaching (!?!) known as the Doctrine of Discovery. In the recently released book Unsettling Truths: the Ongoing Dehumanizing Legacy of the Doctrine of Discovery by Mark Charles and Soong-Chan Rah, we learn how this heretical teaching continues to shape both church and state today. Charles and Chan write:

On June 18, 1452, Pope Nicholas V issued the papal bull Dum Diversas, which initiated the first set of documents that would compose the Doctrine of Discovery. The official decree of the pope granted permission to King Alfonso V of Portugal “to invade, search out, capture, vanquish, and subdue all Saracens (Muslims) and pagans whatsoever, and other enemies of Christ wheresoever placed, and the kingdoms, dukedoms, principalities, dominions, possessions, and all movable and immovable goods whatsoever held and possessed by them and to reduce their persons to perpetual slavery (emphasis ours), and to apply and appropriate to himself and his successors the kingdoms, dukedoms, counties, principalities, dominions, possessions, and goods, and to convert them to his and their use and profit.”

In other words, if you were not European and Christian, we could enslave you, steal your land, or both. This was how explorers like Christopher Columbus “discovered America.”

I was baptized in August of 1959. I have spent my life being formed by the church in worship, Sunday School, three different church camps, a Lutheran college, and a Lutheran seminary. And I don’t ever remember learning about or even hearing about the Doctrine of Discovery until 2016 when the ELCA Churchwide Assembly formally repudiated this heretical teaching! (Learn more at elca.org/JLE/Articles/1202.)

To this day, the Catholic Church has yet to rescind this doctrine that is also embedded in the foundational documents of the United States (including the Declaration of Independence, the Constitution and an 1823 Supreme Court ruling, Johnson v. M’Intosh).

If you, like me, never learned about the Doctrine of Discovery and how an anti-Christian teaching on “greatness” has formed us more than what our Lord embodied, is embodying, and will embody forever (see Mark 10:32-45), then I invite you to study both of these materials:

· Unsettling Truths: the Ongoing Dehumanizing Legacy of the Doctrine of Discovery by Mark Charles and Soong-Chan Rah (available at heartsandmindsbooks.com)

A warning: even though I was formed by the liturgy to acknowledge “we are in bondage to sin and cannot free ourselves” and to rely on God’s saving grace through Jesus Christ, this book and this film made me fiercely uncomfortable. Suddenly, I wanted to see myself as innocent of any complicity in these crimes against humanity. That is why being Lutheran helps, because we have been set free by Christ’s righteousness, therefore we can tell the truth about our nation’s and church’s history and the consequences of the distorted illusions of greatness and exceptionalism we have inherited. I believe God’s amazing grace sets us free to be healed by Gospel medicine. The unsettling truth will set us free from continuing to use God’s name to justify atrocities and become the healing Christ the world desperately needs.