Sister Emma Francis, First Black Deaconess to Serve in North America and the First Lutheran Deaconess from the West Indies 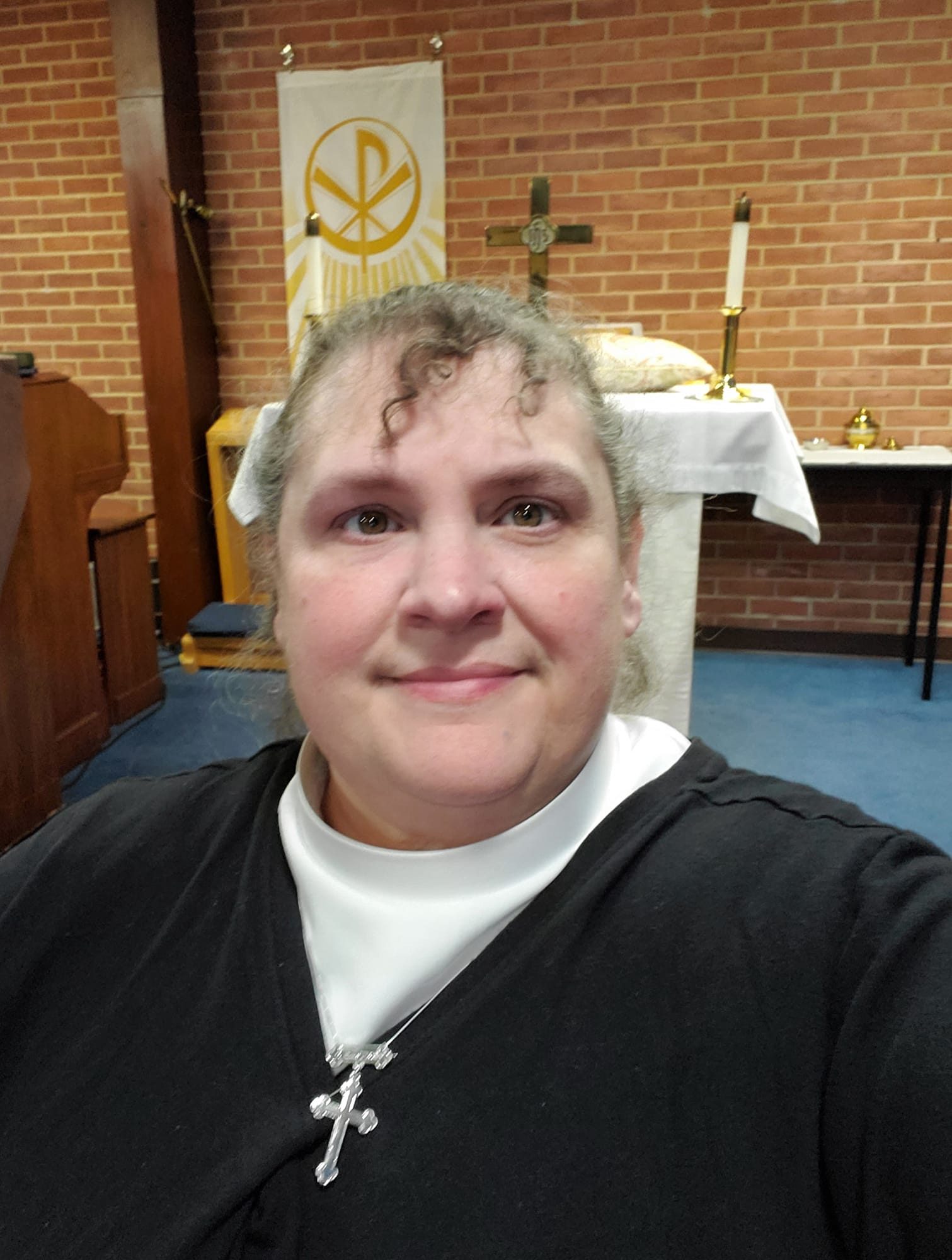 Using your imagination, form a picture in your mind of a little Black girl from the Virgin Islands. This little girl is outside playing hide and seek with her brothers. She has a big heart and love for the Jesus whom she has spent her whole life learning about from her father, who is a Moravian pastor, and her mother, who is a very faith-filled woman. This little girl, named Emma, being so full of faith in Jesus as her Lord and Savior, wishes to share this wonderful news with others. In the midst of her play, she begins to talk with the trees and animals around her, telling them of the love of Jesus. Being the boys that they are, her brothers then go on to laugh and mock her for talking to the trees and animals. They tell her that she can’t talk to trees and animals, rather that when you talk about Jesus, you have to tell other people.

Feeling disappointed, because all the people that she knows already know about Jesus, but determined, little Emma begins to seek out someone with whom to share the good news of her Lord and Savior Jesus Christ.  While swinging high on the swing, she looks over and sees the old man, whose name is Brown, who helps her mother with gardening. She had been told by her mother that they must be kind to him because he is poor and uneducated, that he can’t even read. So, little Emma decides that she will tell Brown all about Jesus. And from that day on, she set out to tell Brown all about how Jesus is the savior and how He loves all of us, even him. Brown humored and listened politely but, as time went on, he listened more earnestly, wanting to know more and more of this most awesome love found in Jesus. One day Emma took Brown in to her father and shared with him how she had been teaching him all about Jesus. She brought him to her father because she had taught him all she knew but he wanted to know more.

Emma Hermina Francisca Francis was the first Black deaconess in American Lutheran history. She, being one of eleven children, daughter of Rev. Joseph Franklin Francis of the 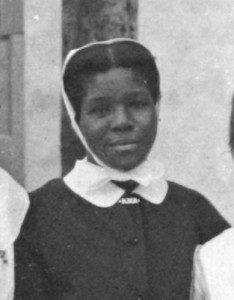 Moravian church and of Mary Henrietta Francis, was born on December 7, 1875, on the island of St. Kitts in the Virgin Islands. She spent her young life helping her mother minister to the people around them, by taking food, clothing, and other necessities to them. She had a strong desire to share the good news of Jesus Christ with others and she realized that she could do that, not just by telling them about it, but by living her life as an example of the love found in Jesus. She felt the call to church service at a very young age.

In 1890, at the age of 15, she went off to study teaching at a Moravian training college in Antigua. The following year, on Palm Sunday, she was confirmed by Bishop Romig and it was then that she pledged her life to church service. She had a strong faith and believed that God would sustain her on this mission. After graduating, she returned home and began teaching at a mission there. After losing her mother and nearly her father to illness, she then traveled to Germany to actively seek out becoming a missionary. There she met Mother Eva von Thiele-Winkler, who was widely known throughout Europe as one of the most spiritual leaders in deaconess work. She and Emma formed a long-time deep friendship. Emma was originally considered for missionary work in Cameroon and Sudan but was denied these posts because they feared that she would not be accepted as an equal with white missionaries there. She then was admitted as a probationary sister and sent by the Missionary Society of Denmark to the orphanage for girls at Fredericksted, St. Croix, Virgin Islands. When the U.S. purchased the islands, Sister Emma was transferred to the Motherhouse in Philadelphia, PA, where she was consecrated a Deaconess on Pentecost in 1922.

Sister Emma remained in the states for five years, serving her own people at Transfiguration Lutheran Church in Harlem, New York City. When she arrived in NYC, she quickly realized how different things were there from all that she knew, especially for a woman from the West Indies. However, she was a highly educated woman, who spoke three different languages and she quickly put that education to use in serving the people around her. She was able to help many arriving to the city from various places who might not otherwise find the help they needed. It was during this time that she had begun saving money from doing odd jobs here and there, including baking, ironing, mending, embroidering, and gardening.

One day, Sister Emma asked to meet with the West Indies Board of the Lutheran Church in New York. She offered up a short but concise speech steeped in the deep love of her diaconal heart. “I want to express to this Board of our Church my deep gratitude for all you have done for my people. I want to ask that you will accept a little money which I have made, as you will see from this bank book, in small amounts, that you will decide how best to use for the work in the West Indies and New York.” (Literature Headquarters, Women’s Missionary Society of the United Lutheran Church, Philadelphia, Pa.) The Director of the Board then opened the book, much to his surprise, to find that she had saved 3,874 francs and twenty bits, which, at the time was the equivalent in American money of $700. 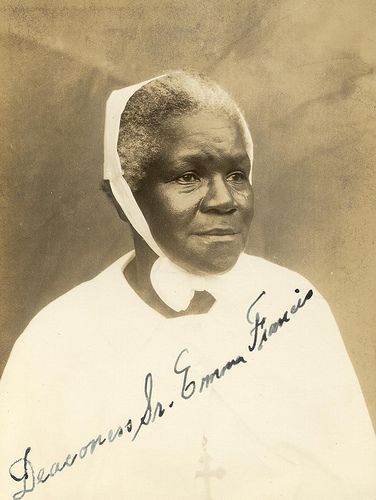 Sister Emma returned to St. Croix in 1927 and, once again, took over supervising the Ebenezer orphanage, where she served for many years before being taken ill and passing away on April 8, 1945. Her funeral was the largest to ever take place on the island of St. Croix and she was laid to rest at the Fredericksted Cemetery. It is fitting to remember Sister Emma’s great faith from what she said of her confirmation experience: “I pledge myself the morning before confirmation service that I would give my whole life to God. I did it as best I then knew how and when on that Palm Sunday evening, I repeated that beautiful hymn by Francis R. Havergal, ‘Take my life that I may be, consecrated Lord to thee,’ and the minister laid his hand on my head and said, ‘The mountains shall depart from thee . . . but my loving kindness shall not depart from thee’ (Isaiah 54:10), I felt assured that God was able to keep me.”

To this day, the Ebenezer Orphanage remains. It is now the Queen Louise Home for Children and, in the 1980s, a new building was built in the deaconess’ honor called “Sister Emma Cottage,” a special unit which provides intensive 24-hour residential foster care for children and young adults with severe developmental and physical disabilities. Many of the residents use wheelchairs, have special impairments, and are medically fragile. Sister Emma Francis had a strong diaconal heart who lived her life in service of ministry in the name of Jesus Christ.

Sr. Megan McClinton is a member of the Deaconess Community of the ELCA/ELCIC, serving in the Lower Susquehanna Synod at Mt. Zion Lutheran Church in York and at Christ Lutheran Church, Starview, in Mt. Wolf, PA. Sr. Megan has served as a member on the Towards Racial Justice Team of the LSS and currently serves faithfully within her community as a member of the Poor People’s Campaign working group. Sr. Megan has a strong diaconal heart for social justice, seeking to show God’s love in the world caring for the least of these by reaching out in love and care for the poor and marginalized in our world.