One Wish by Rev. Brian McClinton 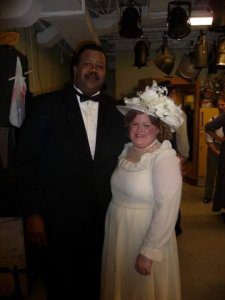 In 2009, a community theater asked me to fill in for the role of Booker T. Washington in the musical Ragtime. (The selected actor had quit a month before production.) I was contacted due to my musical theater background and my semi-professional background as a singer and performer.

I was taught, before playing a role, to delve into historical characters in order to understand them.

Booker T. Washington was a complex person. People involved with civil rights do not mention him much because his writings suggested assimilation while working toward equality. Booker worked more behind the scenes, fighting for desegregation and getting financial assistance from prestigious whites to support those litigious cases that moved this country toward better civil rights in the country.

One of Booker’s lines in the musical was: “We must exhibit patience, self-control, forbearance and dwell above acts of hatred and cruelty.” I was moved by this quote. I was moved to create a meditation on a wish for equality that really does entail what Washington says, which is an arduous endeavor.

Before dinner one day, I sat at piano, closed my eyes, visualized the quote, and set it to music. You can listen to the resulting song “One Wish” at the following link:

“One Wish” By Rev. Brian McClinton

Pastor Brian McClinton was ordained in 1993 and served parishes in Wisconsin and Pennsylvania. He is currently Lead Pastor at Mt. Zion, York and Christ, Starview. His wife Dn. Megan is a Deacon who serves together with him as a clergy team. He is an accomplished singer and a fan of the Green Bay Packers.caster.