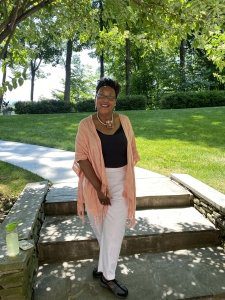 When my-then fiancé and I were searching for a church, we were looking for a situation that provided space for both of our spiritual beliefs and orientations. If I had to describe my church orientation, despite my early Methodist upbringing, I’d say I lean more toward a fundamentalist approach. (Amen. Nuff said.) My fiancé leans more to the intellectual, preferring to concentrate on the historical Jesus as an example of how to live.

We’d visited several churches in the surrounding community by the time we decided to try the Lutheran church directly across the street from the building each of resided in as single individuals. When we entered the church, the welcome received was like the embrace you get from family who haven’t seen you in a long time. Warm, soothing, and accepting. This was such a pleasant surprise because this was a white congregation and we had not been sure of the welcome we would receive.

Upon entering, beyond handing us a program, we were warmly greeted by an usher who engaged us in brief conversation. Before the service began, she invited us to stay for a snack after church (we did not know Meet and Greet was a regular part of the Sunday service). We chose to sit at the back of the church making us quite visible during the recessional as the congregants’ eyes followed the crucifix and the choir made their way to the rear of the church. Almost immediately, someone came to us before we exited our pew and said they were glad to see us and hoped we would come again. The sweet usher was nearby and approached us asking if we would like to walk with her to the social hall for some refreshments. We said yes.

Downstairs everyone was nice. Heads nodded our way and people came to the table we were sitting at to greet and introduce themselves. It was an upbeat group, laughing and truly enjoying their fellowship. Without exception the congregation members asked us to ‘come again.’ They all seemed to be one. The pastor and his wife learning that we lived just across the street invited us to stop by the church anytime.

What made our welcome at Messiah Lutheran Church so hospitable was the hands-on approach of the congregation members, each taking it upon themselves to engage with us. When it came to the Meet and Greet, we were not left to find our own way. Instead, we were walked with. When we decided it was time to leave the social gathering, again care was taken to ensure we could find our way out. The welcome we’d received was extraordinary. It felt genuine and I knew I was “at home.”

Jacqueline Smith-Bennett is a lay leader in the Lower Susquehanna Synod serving on the Toward Racial Justice Task Force. She has been twice elected as a delegate to the LSS Annual Assembly because of her active participation on Church Council of Messiah Lutheran Church, its usher team, and pastoral call committee. Jacqueline is a certified wedding celebrant living in Camp Hill, PA.