Christianity: How First Responders, Forestry Personnel and Townspeople Live Out Its Virtues 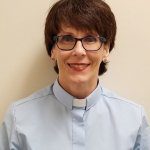 “Christianity: How First Responders, Forestry Personnel and Townspeople Live Out Its Virtues”

by the Rev. Nancy Brody

As fire burned up one side of Berry Mountain on the south side of E’ville, some people watched while I listened. Myself and hundreds of others listened via public safety radio broadcast. Many observed the action by other means. As I prayed for the fire to be contained and extinguished, what my ears witnessed struck me. What I heard was a marvelous model of Christian community, everything in italics has a perfect parallel.

These are the characteristics I observed:

Though the atmosphere was literally dark, smoke-filled and threatening, cooperation filled the air. Requests were met with, “You got it.”

Communication included status reports, naming individual persons, types of vehicles, equipment and resources used, asking for what was needed and determining whether they were available. Needs required forethought: inroads required cutting in advance, and necessary provisions had to be made for refueling. Also by necessity, some logistics could only be figured out/orchestrated in real time.

At all times, it was imperative to know and account for where folks were. Extra precaution and care was required because all were using the same access road.

It’s important to see the parallels and realize the duties Christians have to each other. By listening that night, I learned that life in community, a life of faith and firefighting have much in common.

We too, battle against destructive consuming forces that appear to be gaining ground and succeeding. We too, seek to limit the swath carved by such forces and reduce damage caused when more and more spaces are threatened. We must take preventive measures so what’s left will thrive. Homes, families, marriages, individuals, and creation depend upon the concerted efforts of many to keep consumption from running wild and destroying everything in its path.

Other things I learned are these:

Sometimes, keeping your high-beams on while in Park helps others to see. Sometimes, it blinds them.

After five and a half hours, there was a request for rehab supply. In other words, snacks. EMS and trucks waiting on stand-by asked leaders for an update and to restate their purpose without hinting at impatience.

It meant you became available for other assignments.

Religion and church may be in crisis, but I have renewed hope. The values of Christ are alive and well in everyday people: volunteers, professionals and citizens willing to make the needs of others their priority, people who value and identify with the land around them.

I loved hearing the phrase, “Facebook is blowing up…” spoken in terms of something good as people wanted to help drop off water and snacks for those fighting to preserve what they valued together and shared by identity.

The next time you use the word, local, try not to think of one location. Think of those living within a broad radius, from miles and miles away who care about the same things you do, who are willing to do battle all through the night when necessary to protect what and who they love.

As is true for church and society, it would not have been enough to pray and simply rely on God’s mercy. Destruction would have continued until it ran out of fuel. That night, forestry, DCNR, fire companies, and EMS had to pool their collective human powers and resources. They had to work cooperatively while communicating effectively. Doesn’t that pretty well sum up the hope we place in our relationships on earth and with God?

Even though the fire still traveled from the bottom, up one whole side of Berry’s Mountain toward E’ville, crested over the top as the wind blew, and devoured plenty of wood and brush for fuel, through it all, through the battle, there appeared to be what was needed: plenty of water and help, i.e. provisions. No one (to my knowledge) required medical attention.

Tragedy was averted through many cautions taken, through wisdom, by bravery and skill at work. Heart-filled passion and grace permeated the collective efforts of all.

That night and everyday since, I not only give God glory that stems from avoiding a worse case scenario, I have great appreciation and love in my heart for the local population.

That night, I discovered kinship among folks I had never met: citizens from a broad radius of people around us. That night, I deepened the kinship I already felt to citizens of Halifax, members and friends of our congregations.

May these reflections of the wildfire on Berry Mountain teach us to daily model these lived-out virtues of Christianity. May we too, demonstrate the passion of first responders and community servants:

Suffer no loss. Work to preserve all that is healthy.