From “How do you know?” to Encountering the Living Jesus

Recently, I returned from a journey to the Holy Land. As a science major in college and by training, I am skeptical. I want proof of claims. As we began our trip, there were claims that this is the exact spot that Jesus multiplied the loaves and fishes, that this is the spot that Jesus preached the Sermon on the Mount, that this is the location of Peter’s house, and that this is where the shepherds were in the fields outside of Bethlehem when Jesus was born. The question that was rolling around in my mind was, “How do you know?” For the first centuries after Jesus’ death, people were being persecuted for following the way. I am not certain there were markers for these events in Jesus’ life. I think that for hundreds of years people were not marking these places but perhaps avoiding them. Time marched on and layers of progress covered over previous places. Over the millennium since, Christians have marked these sites by building churches on top of where the sites were purported to be. 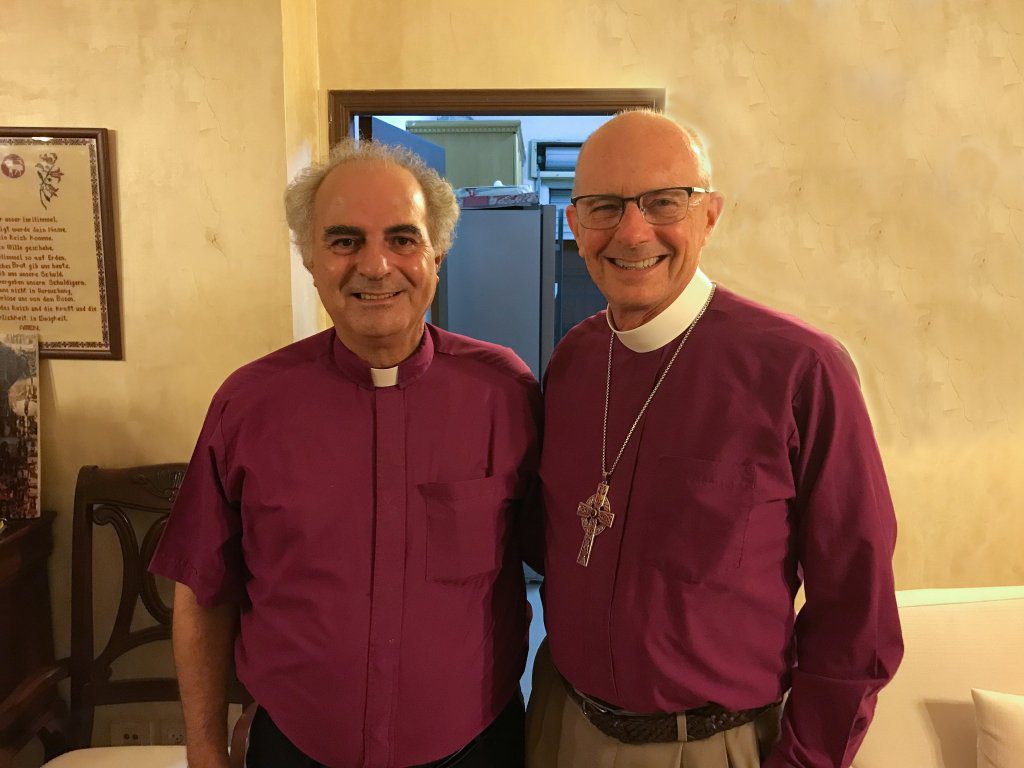 In the end though, I realized what mattered was not these precise claims of location. What mattered was that in this region, in these neighborhoods, God incarnate chose to enter God’s creation. Paul’s hymn of praise echoed, “Let the same mind be in you that was in Christ Jesus, who, though he was in the form of God, did not regard equality with God as something to be exploited, but emptied himself, taking the form of a slave, being born in human likeness. And being found in human form, he humbled himself and became obedient to the point of death—even death on a cross.” (Phil. 2:5-8 NRSV). The realization was that God’s presence transcends time and space. That God’s presence does not reflect a precise location on the map or a particular building, but God is found in the community of saints.

While in Palestine, I met Christian siblings in the faith who are persecuted by the government for being Palestinian, and they are rejected by many Palestinians for not being of the Muslim faith. Yet these people witness daily to the resurrected Jesus. In meeting with Bishop Azar of the Lutheran Church in Jordan and Holy Land and with his pastors, I found a deep and abiding faith. They know persecution and injustice and yet they witness daily to the power of Christ in the very place that God chose to be incarnate to the world. Their witness transcended place and locality and was inspiring to see how faith in Christ can overcome adversity. It was in these saints that I saw the face of Jesus.

It was in worship that I also encountered the living Jesus. We had the opportunity to worship in the Church of the Shepherd of Fields outside of Bethlehem. I do not know if it was that exact spot that the shepherds stood on that Christmas night long ago, or whether it was December 25th or sometime in September, but we gathered and heard God’s word from Luke, “And suddenly there was with the angel a multitude of the heavenly host, praising God and saying, ‘Glory to God in the highest heaven, and on earth peace among those whom he favors!’ When the angels had left them and gone into heaven, the shepherds said to one another, ‘Let us go now to Bethlehem and see this thing that has taken place, which the Lord has made known to us.’ ” (Luke 2:13-15 NRSV). We sang “Angels We have Heard on High,” and I knew that Christ was present in that place. Not because of the place, but because I was in a community of siblings in Christ whose voices were as the voices of angels. Voices I heard that day in Bethlehem and voices that are here as well. Thanks be to God for the saints that have gone before us and the saints that are with us now in this place.