Book Review of White Fragility: Why It’s So Hard for White People to Talk About Racism by Robin DiAngelo by Sister Megan Reynolds McClinton 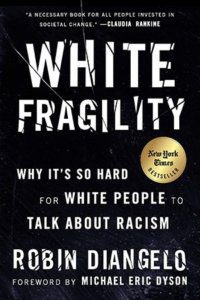 In White Fragility: Why It’s So Hard for White People to Talk About Racism, Robin DiAngelo takes a hard and introspective look into why it is so difficult to have conversations with white people about racism. DiAngelo directly tackles this challenging topic from the premise that, in the United States, white people are socialized from birth into a society which uplifts and benefits them as white people. In other words, our society is one in which white supremacy is the norm.

DiAngelo also redefines the term racism, moving away from the commonly used definition that is connected to overt acts of hatred. Rather, using the socialization understanding, she redefines racism to mean that simply by being raised in a society that teaches in all aspects that whites are superior means that all white people are racist because all white people benefit from such a society simply from the fact that their skin is white. She makes an important point that many, if not most, white people do not realize nor even see this benefit in their daily lives and, as such, the fact that whites are racist, by the above definition, is not in and of itself the direct fault of each individual. It is through this understanding that conversation can begin, relationships can be repaired, and societal downfalls can begin to be healed.

DiAngelo defines and describes how fragility manifests itself in the reactions and responses of white people when faced with the realities of racism. She directly confronts the ways in which white people get angry and defensive when confronted about the privilege they enjoy as white people in our society and how these behaviors prevent any possibility of cross-cultural conversation, healing, and mutual relationship.

Using many examples, including personal experiences of her own fragility, listening to the experiences of people of color, and historical events, DiAngelo helps people to explore, face, and confront their own fragility in order to begin conversation and the healing of societal breakdown.